Showing posts from June, 2019
Show All

Rocky and the Million Dollar Question 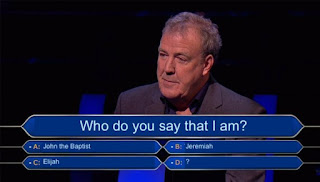 “Who do you say that I am?”
That’s the million-pound question for Simon. He’s already got the ‘ask the audience’ answers up on the board, as it were: some say he’s John the Baptist (difficult, given that John was by this stage suffering from a slight case of death), some say he’s Elijah, others Jeremiah (both more decidedly dead, several hundred years before). Which means that everyone is saying that Jesus is a prophet, because Jeremiah, Elijah and John all prophesied the coming of the Messiah, the anointed one - in Greek, the Christ - who would come to judge and save the Jewish people. They thought that Jesus was yet another of these prophets, heralding the Christ’s coming.
But Simon doesn’t choose any of the answers on the board, because, to stretch the metaphor, he's opted to ‘phone a friend. Or, properly speaking, he's already been ‘phoned by a friend: God. Somehow, the right answer has been mystically revealed to him:
“You are the Christ, the Son of the living God.”
“Tha…
Post a comment
Read more

- June 15, 2019
Salutojn! Strange to think that a small Jewish sect could, within thirty years of the death of its founder in Jerusalem, spread at least as far as India to the East and Rome to the West. How could it happen? There are sociological explanations: for instance, it was a religion which appealed particularly to the poor and to women, in a way that its contemporaries did not. There was the theological appeal, too, of monotheism, which resonated with the Platonic intellectual currents of the day better than the dominant polytheism of pagan folk religion, and pagans who admired the Jews now had the opportunity to join them. At the same time, there was also bitter persecution, ridicule and humiliation, too. The well-off could have avoided all this by joining some other mystery cult, like that of Mithras or Osiris. Certainly, the fishermen, essentially small businessmen, who were leading the nascent Church could have afforded to avoid their martyrdoms by doing just this. Yet they did not. So w…
Post a comment
Read more

Why the Church needs to abandon Christian values

I've got a new article out on Living Church, here. Yes, the headline is a bit of an attention grabber. Mea culpa.
Post a comment
Read more
More posts

Fr Thomas Plant
The Rev'd Dr Thomas Plant has been a parish priest, university theology lecturer, school chaplain, Latin teacher and Army reservist. A classicist turned theologian, he read for his PhD at Cambridge University, studying comparative Christian and Japanese Buddhist thought. He moonlights as an Aikido instructor and writer of cosmic horror fiction. Find more of his books at bit.ly/tomplant, read his blog at bit.ly/mrgogblog and follow @thosplant on Twitter.